The Birmingham Civil Rights Institute, part of the Birmingham Civil Rights National Monument and an affiliate of the Smithsonian Institution, is a cultural and educational research center that promotes a comprehensive understanding for the significance of civil rights developments in Birmingham. Celebrating its 30th anniversary in 2022, BCRI reaches more than 150,000 individuals each year though award-winning programs and services.

MISSION: To enlighten each generation about civil and human rights by exploring our common past and working together in the present to build a better future.

VISION: We stand strong as THE CORNERSTONE of the civil rights story, a living memorial with an ongoing mission.

VALUES: The Birmingham Civil Rights Institute is committed to:

It takes a strong team of individuals to make the programs of the Birmingham Civil Rights Institute available to the public. BCRI is operated and governed by a board of directors and a staff of full and part-time professionals and interns working together to fulfill the BCRI’s mission. If you are interested in working at BCRI, visit our careers page.

Awarded the National Medal for Museum and Library Service (IMLS), the the nation’s highest honor for institutions that make significant and exceptional contributions to their communities. Since 1994, IMLS has presented the award to institutions that demonstrate extraordinary and innovative approaches to community service.

Joined the International Coalition of Sites of Conscience

First Organization to Receive “I AM A MAN” Awardfrom t he April 4th Foundation in Memphis, TN

Featured in National Geographic’s Book, “100 Places That Can Change Your Child’s Life: From Your Back Yard to the Ends of the Earth”

Featured as the #2 attraction (out of 79) in Birmingham by TripAdviser.

Received the Director’s Community Leadership Award from the FBI 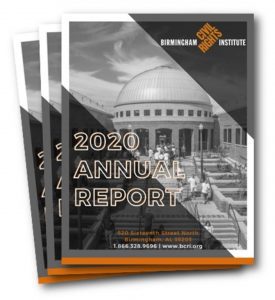