Was the Civil Rights Movement Necessary? by Charles Woods, III 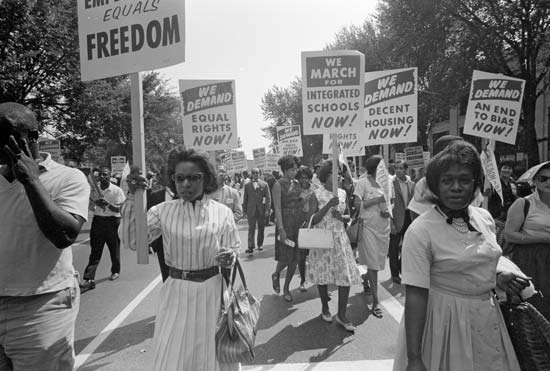 “Why did people want to treat Black people badly?” said the little girl looking up at me at my first outreach as the new Outreach Coordinator for BCRI. (This particular outreach is called Tug – o – War and illustrates the struggles between the establishment and equality during the Civil Rights Movement and how it was young people who were able to tip the scale and cause lasting change.)   All I could say at first was “Good question,” “Goood question,” then I thought about it and gave her the best answer I thought a 4th grader would understand. This question sent me back to my grade school days when I asked a similar question “Why did Black people have to go through all of this.” (Relax this is not going to be a talk about the horrors of slavery or how evil white people are), but I would like to attempt to answer why was the Civil Rights Movement necessary?

The United States of America is one of the youngest countries in the world but has one of the oldest constitutions.  You can attribute this to many things but the most common one is that the constitution has an amendment process that allows for change as the people change and ideals change.  After the civil war during reconstruction we hear about many Blacks who were able to be elected to important political positions. People such as  Hiram R. Revels and  Blanche Bruce both of Mississippi, Benjamin Turner of Alabama, Robert DeLarge and Joseph Rainey of South Carolina, and Josiah Walls of Florida were all elected as the first Blacks to Congress. I know that these people were elected during reconstruction when Union troops were in control of southern state governments, but the point is that Blacks were using their newfound rights and participating in the voting process. Blacks were actively seeking the American dream, so what happened? Besides sharecropping, the KKK, terror, Jim Crow, lynchings, literacy test, poll taxes, etc.  Reconstruction ended and now the southern states were free to deal with the newly freed Blacks how they wanted.

After reconstruction Blacks started many prosperous self sustaining communities, where they had all they needed, provided by Black business owners.  So why integrate? What was so important about having an integrated society? At this time Jim Crow was the law of the land and nothing was equal for Blacks especially in the south. Even in the North, Midwest, and West Blacks were treated as second class citizens, Why did we want to integrate with people like that?  We know that separate is not equal, but integrated didn’t mean equal either. So during the 50’s and 60’s Blacks with the help of others marched, protested, sat in, and boycotted to fight for equality. Not equality so that society would be integrated but for equality as a full citizen of this country. The 14th and 15th amendments were passed to give Blacks the rights they needed to be citizens of the United States of America, but socially and politically no one honored those rights. Many times absurd measures were taken to purposely deny or scare them into not trying to use their rights.  Then it dawned on me, the civil rights movement was not about wanting what white people had, or being able to sit anywhere on the bus, or being able to sit down and eat in an establishment, or even being able to vote.  It was all about making the United States of America live up to it’s promise.  It was about making all that rhetoric in the constitution true and real for everyone in the United States of America including Blacks. It was about holding people accountable when they purposely denied or inflicted terror to keep Blacks from exercising their rights. So the Civil Rights Movement was necessary, not because Black people were tired and fed up, but because this country promises to provide an environment where everyone has the right to liberty and the pursuit of happiness.

Due to the rapid spread of COVID-19, the world as we know it is changing. There is literally no sector of our community and globally that has not been touched by the pandemic. Subsequently, out of a concern for prevention, safety and in response to recommendations to practice social distancing, the Birmingham Civil Rights Institute has been temporarily closed to the public indefinitely. All scheduled programs have been cancelled and our staff members are working remotely. Unfortunately, we now find ourselves facing a devastating, unexpected reality as our earned income has now come to a screeching halt. We realize that many of our supporters are also struggling to address their own economic losses. We recognize that it is in times like these that our supporters can be more generous than ever.

Please consider making a financial gift to the Institute of any amount to help fill the revenue gaps that are increasing daily. As a steward of our nation’s civil and human rights history, we know that individuals and communities can prevail and the examples of courage in our community can continue to inspire us. Thank you in advance for your careful consideration and we hope that you and your family remain healthy and safe.